These soft and Fluffy pumpkin cinnamon rolls are perfect for a cozy fall or winter. Enjoy these gooey cinnamon swirls drizzled with maple frosting for a sweet breakfast or dessert.

These pumpkin cinnamon rolls are next level!

I say it’s optional, but it really makes them taste amazing because of the pumpkin butter filling. I’m obsessed with Trader Joe’s Pumpkin butter.

In truth, something about the way these cinnamon rolls leave your house smelling of warm pumpkin pie, makes them irresistible.

Without a doubt, there’s no better way to celebrate the beginning of fall.

If you like this fall cinnamon roll recipe, you should also try my Caramel Apple Cinnamon Rolls.

How do you know when yeast is activated?

I know a lot of you might be intimidated by using active dry yeast. So was I!

But let me show you a few goof-proof ways of activating the yeast.

Initially, stir the yeast so it’s well mixed, but then leave it alone!

By and large, you will know it’s activated when the yeast floats to the top and bubbles – this is called blooming.

Temperature is KEY! Yeast needs the perfect temperature to live – 110F. Use a thermometer is you are beginner.

Sugar also helps! Yeast needs to eat sugar to “live”. Yes, that’s how champagne is made as well.

Markedly, you should see signs of “life” within the first 5 minutes, and it should pretty much be fully “alive” within 10 minutes.

How to measure flour for cinnamon rolls?

In brief, the best way to measure flour is using a scale.

However, if a scale is not available to you, my number one rule is DO NOT pack your flour in – you want the natural air within to remain.

Simply, take a spoon and transfer your flour to your measuring cup. Additionally, you can level the flour out with a knife.

For the most part, this should ensure your flour is measured correctly.

These cinnamon roll ingredients are simple and pumpkin-inspired:

In brief, if you want to make this recipe vegan and dairy free, use the vegan butter and dairy-free milk of your choice. Specifically, I love using coconut milk or almond milk.

How to Make Pumpkin Cinnamon Rolls

Foremost, here is a reminder to take your butter out of the fridge and bring it to room temperature. Specifically, you need it to be soft and spreadable.

Second, melt the butter over medium heat in a medium-sized pot. After fully melted, add the milk to the butter. Heat the milk and butter till it’s warm, but not too hot to the touch. If you want to be sure, use a thermometer and measure till it’s 100-110F.

Third, add a tablespoon of sugar and stir till completely dissolved.

After, sprinkle the active dry yeast in the milk mixture and let it activate for 10 minutes. You’ll know it’s activating when the yeast looks foamy.

Afterward, when the yeast is activated, add the rest of the sugar and a pinch of salt.

Next, add your flour to the milk mixture and stir with a wooden spoon consistently. Once 2 cups are added, the dough should still be very sticky.

After, gradually add a little bit of flour at a time and knead for 1 – 2 minutes until the dough is semi-smooth (should take between 25 – 50g).

In addition, I recommend greasing the bowl with a little bit of olive or coconut oil to prevent sticking before placing the dough in the bowl to rise.

Furthermore, cover the greased bowl with plastic wrap or a tight lid and allow the dough to rise for an hour in a warm place (you’ll know its fully risen when it about doubles in size).

While the dough is rising, you can prepare the pumpkin filling.

First, mix a tablespoon of butter, the pumpkin butter, and the first part of the pumpkin pie spice mixed with brown sugar.

Now, lightly flour a flat surface and roll out the dough into a rectangular shape.

Then, spread the pumpkin filling mixture on top.

Thereafter, tightly roll the dough into a long cylinder and cut it into 9 even pieces using a sharp knife or a long piece of unflavored floss (slide the floss under and pull to the opposite end).

Lastly, grease an 8×8 or 9×9 baking dish with butter or coconut oil and place the rolls cut-side down, with space in between to rise and expand.

After, cover the baking dish with plastic wrap to rise for an additional 20 minutes.

Meanwhile, don’t forget to preheat your over to 350 F.

Then, remove the plastic wrap and brush the cinnamon buns with butter. Optionally, sprinkle crushed pecans on top before baking if you like a little added crunch!

At this point, you can mix the powdered sugar, milk, and maple syrup. However, if this is not enough liquid, you can add more milk to reach your perfect consistency.

Finally, drizzle it over your pumpkin rolls.

How to Make overnight cinnamon rolls

Once you arrange your cinnamon rolls in your pan, you can cover them up with plastic wrap and leave them in the fridge overnight.

Then, bring the cinnamon rolls to room temperature outside the fridge for about an hour and bake as recommended.

In my many years of cinnamon bun baking, there are a few tips and tricks I’ve gathered up my sleeve:

How to serve Pumpkin Cinnamon Rolls

Generally, you can serve these rolls as soon as they’re frosted.

Without a doubt, my favorite way of serving pumpkin cinnamon rolls is with maple frosting.

In brief, mix the ingredients together (proportions in recipe card) and add more liquid if you prefer a drizzly frosting.

On the other hand, you can also try my Vegan Cashew Cream Cheese Frosting – its creamy, tangy, and made with wholesome ingredients.

In addition, I like my cinnamon rolls served with:

How to Store Pumpkin Cinnamon Rolls

If you and your family don’t eat all the cinnamon rolls at once, you can wrap them tightly or place them in an airtight container in the fridge for about a week.

How to freeze cinnamon rolls

Certainly, you can freeze the cinnamon rolls for up to 2 months!

Freeze before baking – first, let the cinnamon rolls rise in the pan. Then, cover the pan tightly and place in the freezer. Before baking, let the dough thaw in the fridge. Specifically, I like to do this overnight and then I put it in a warm spot for about 1 hour before baking as normal.

Freeze after baking – first, let the pumpkin pie rolls cool down to room temperature. Accordingly, I like to freeze them before they are iced. In this case, you can either cover and freeze the entire pan or place the rolls in an airtight container. Personally, I like to wrap them separately for when the cravings hit. Then, when I am ready to eat, I defrost the cinnamon rolls at room temperature and then I warm them up in the microwave. Finally, add your favorite icing! 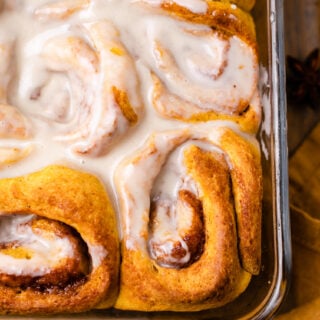 *To make this recipe vegan and dairy-free, use vegan butter and dairy-free milk of your choice (I love using coconut milk or almond milk) **add more milk if you like your icing liquid-y 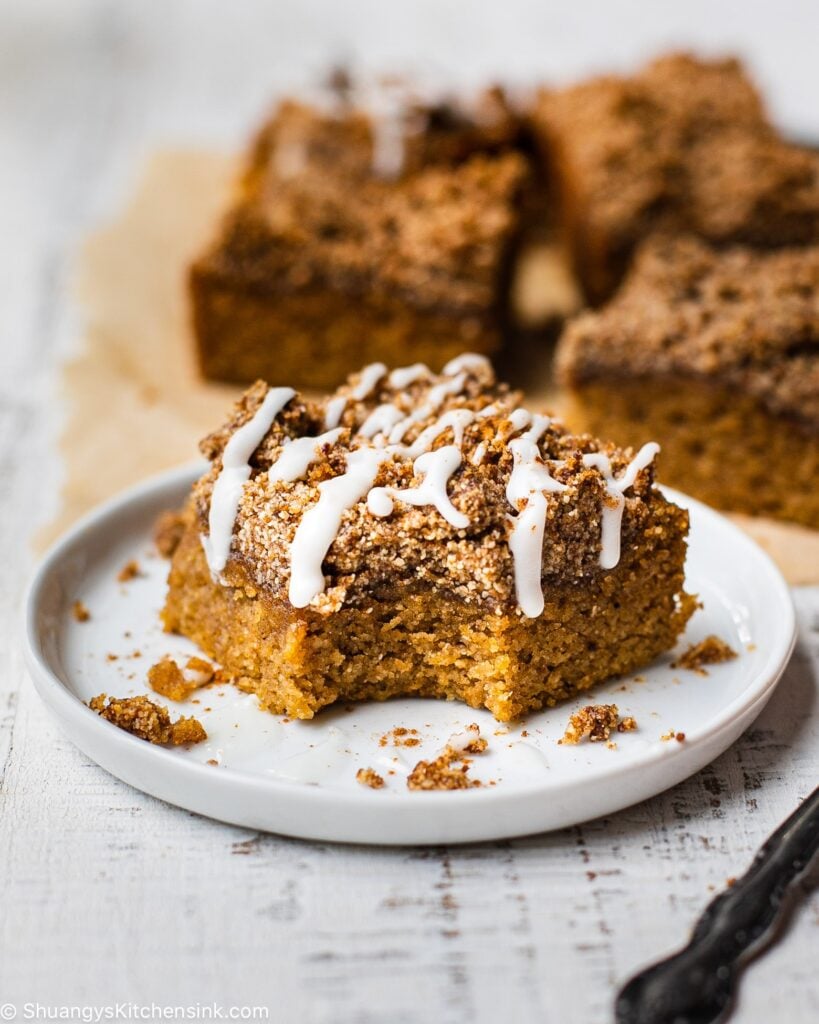 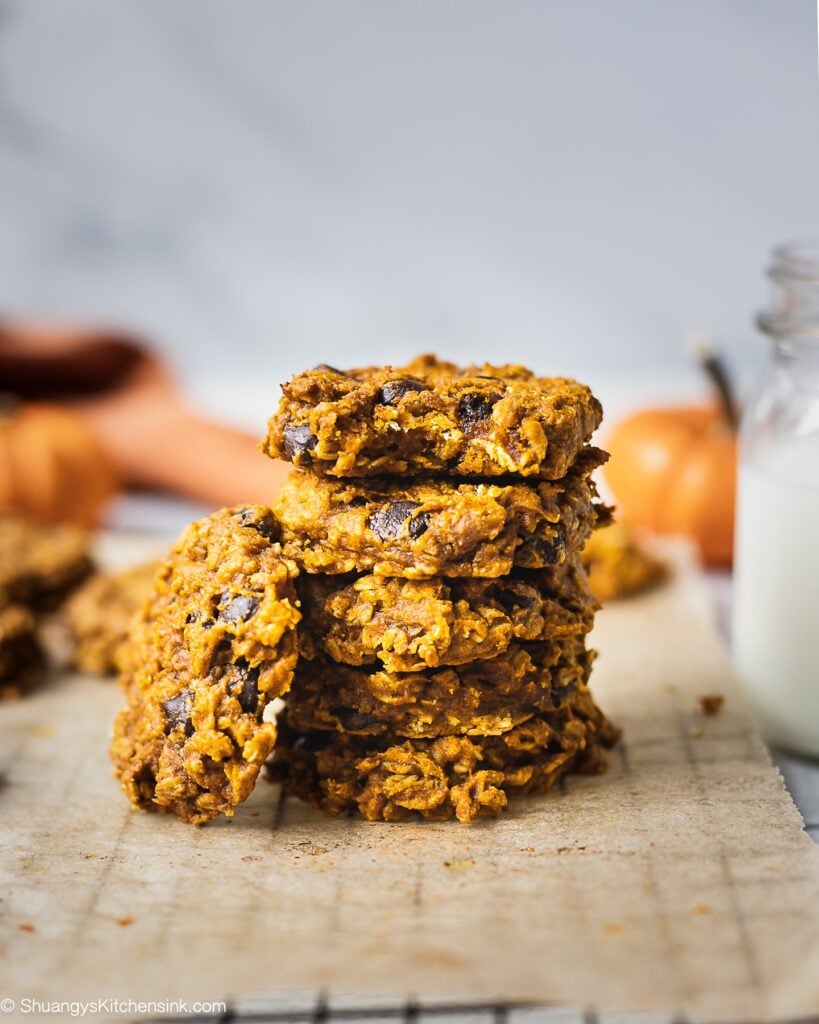 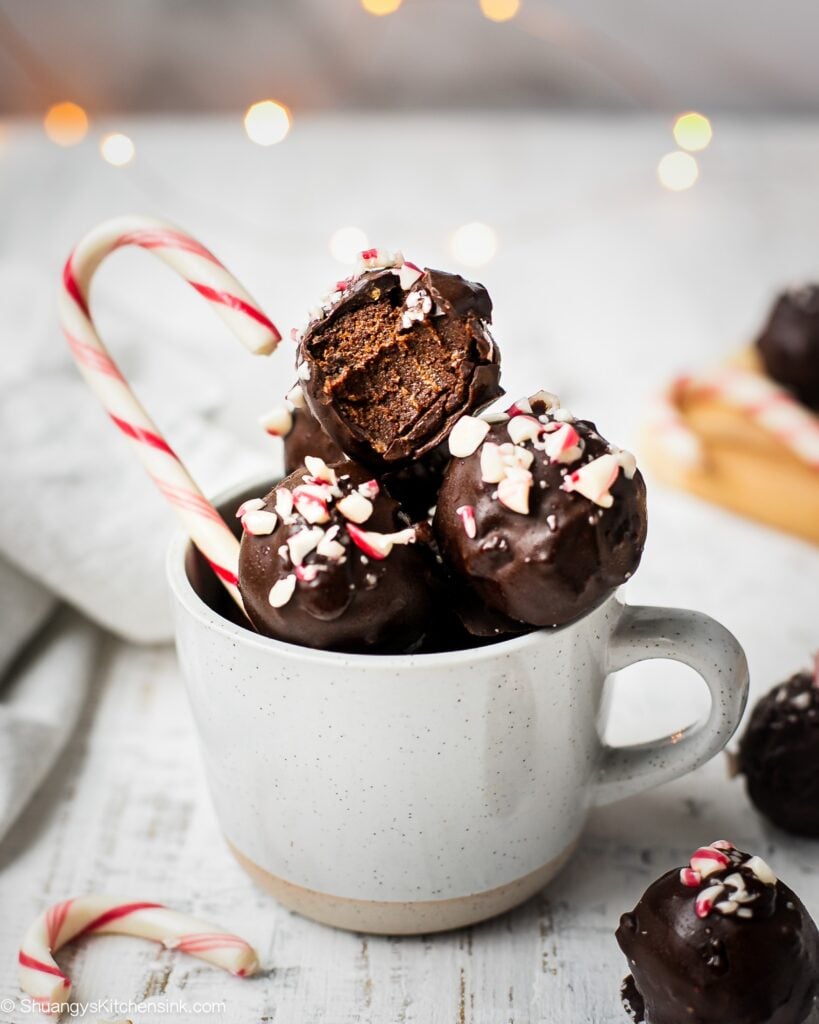 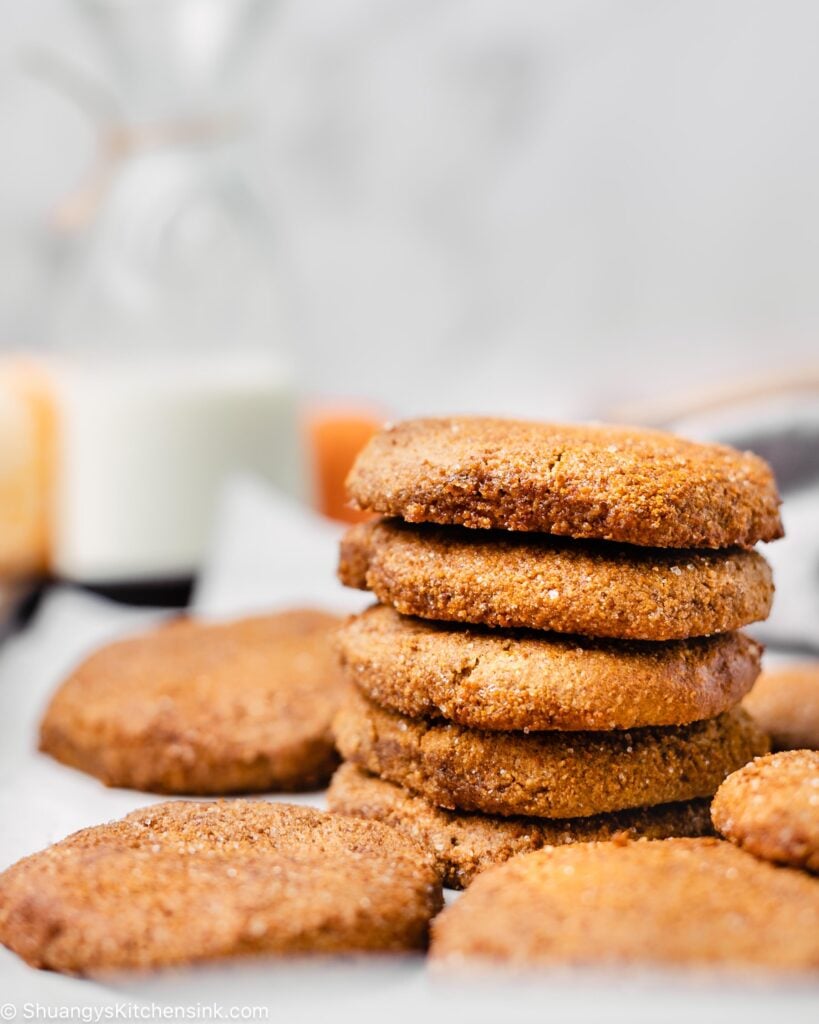